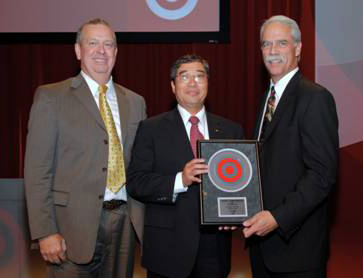 Target Corporation presented "K" Line with its "Ocean Carrier of the Year" Award for 2006 during Target's Annual Transportation Conference held in Minneapolis , Minnesota where the retailer is headquartered. The award was accepted by Mr. Toshio Suzuki, President and CEO of "K" Line America, Inc. According to statements made by Target management, " "K" Line clearly exceeded expectations and excelled in both strategic development and tactical execution in 2006. "K" Line's performance was partially a result of their management team's involvement, focus, and commitment to managing our expectations."

"K" Line is honored to be part of the Target import supply chain, being named "Carrier of the Year" would not be possible without the focused global teamwork of all "K" Line associates," said Toshio Suzuki, President of "K" Line America, Inc.