Kawasaki Kisen Kaisha, Ltd. ("K" Line) takes pleasure in having been recognized once again for its contribution on behalf of environmental conservation during 2008 by the Long Beach Board of Harbor Commissioners that has been promoting a voluntary ship speed reduction program to aid in curbing air pollution from exhaust gas in certain designated offshore waters.

This is the 4th consecutive year that "K" Line has had the distinction of being honored with receipt of this prestigious award for the protection of the environment.

This is an entirely voluntary program in which ships calling at the Port are asked to observe a 12-knot speed limit within 20 miles of the Port (about 37 kilometers) in order to curb emissions of exhaust gas.

Ships operated by the "K" Line Group made a total of 317 callings at Port of Long Beach with a 98.8% compliance rate during 2008, which is the highest among all ocean-going cargo carriers with more than 250 calls during 2008. 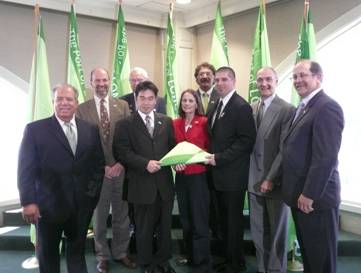