The members agreed to extend CKYH cooperation not only in East-West trades ' optimization but also North-South trades ' development , and in any other fields of operation that will make it possible for CKYH to provide market-oriented services to customers in the world.

In addition to the continuous strong demands from the market in recent years, the shipping industry is facing some obstacles such as extreme bunker price, and increase of various operational costs. The members agreed to study continuously in order to make CKYH's services the most cost efficient in the industry with further cooperation in terminal operation, regional feeder concept, and any operational conveniences, and to expand capacity in each trade in line with future market growth. As urgent and crucial issue, CKYH also confirmed its necessity to review existing service patterns and rationalize the calling ports especially in Asia – Europe services. 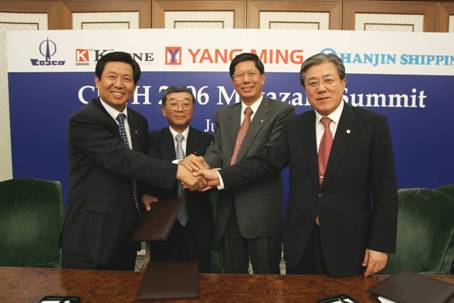 From the left side : Capt.Wei Jiafu of COSCO Group, Mr.H.Maekawa of "K" Line
Mr.W.H.Huang of YANG MING, Mr.J.W.Park of HANJIN
Summary of CKYH service loops as of June 2006 (East / West Trades only)