One of the frameworks was a plan to build a new Training Center in the Philippines based on "K" Line Maritime Academy (KLMA) concept, and in realization a groundbreaking ceremony was held at the new site of KLMA ( Philippines ) in Pasay City on 16th October.

The ceremony was attended by government officials including the Undersecretary of the Department of Labor and Employment Danilo P. Cruz, Mayor of Pasay City Allan T. Panaligan, and Katsue Yoshida, the Senior Management Executive Officer of "K" Line. The occasion, traditionally held to bring safe construction was also graced by other notable figures in the maritime and shipping industries. The project is set for completion at the end of 2007.

Three times as large as the present one, the new Training Center will accept a total of 10,000 trainees a year, has accommodations for 110 people, a dining room, and a clinic. An actual-sized main engine in the workshop and a full-mission engine simulator will be set up especially for skills upgrading of Marine Engineers.

To supply highly-skilled seafarers, "K" Line groups are at work and are the main force behind the training center project, aiming to further improve and maintain the "K" Line brand of Security, Safety, and Trust. 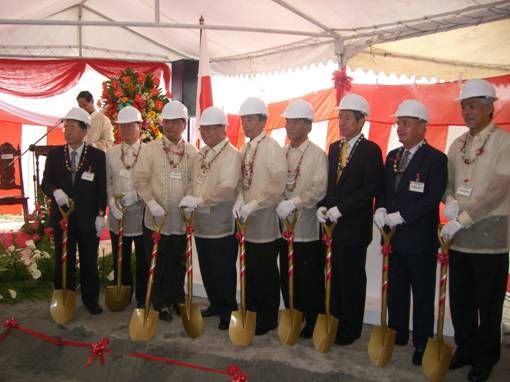