July 11, 2007 - Kawasaki Kisen Kaisha, Ltd. ("K" Line) has introduced "K" Line Maritime Academy (KLMA) as a framework to secure and train new seafarers as one of the main pillars of its ship management structure advocated in "K" Line Vision 2008+(Plus). According to KLMA, several measures were introduced during the past year such as ship remodeling to accommodate onboard training, opening of KLMA (India) in Mumbai, India that was announced 1 st June 2007 and construction of new building for KLMA (Philippines) in Manila that will be completed early next year.

Adding to the above, "K" Line Maritime Academy Master Plan has now been introduced as the newest and latest development in the company's ship management structure.

The fundamental philosophy of the KLMA Master Plan is "Fostering "K" Line Seafarers regardless of nationality" in accordance with the experienced marine technology and skill that have been passed down by "K" Line Seafarers since "K" Line was initially established in 1919.

To widen everyone's familiarization with the KLMA Master Plan concept throughout the "K" Line Group, "KLMA 1 st Global Meeting" was held in Tokyo in earlier this month with attendance of over 100 people. Included were President and CEO Mr. Maekawa and other "K" Line executive officers, 12 KLMA representative instructors from all over the world, 40 managers and staff from in-house ship management companies and 30 managers and staff from concerned manning agents.

As a result of explanations provided by officials of KLMA (headquarters), active discussion among all concerned parties, question & answer period with exchange of opinions and concrete ideas, the meeting enabled everyone present to have a comprehensive understanding of the common goal of KLMA.

From now on, all seafarers onboard "K" Line flag vessels are to be fostered and trained according to our KLMA Master Plan. This new plan will assure maximum safety of navigation with "K" Line seafarers trained in accordance with our standard and aiming for even further improvement while maintaining the "K" Line brand of Security, Safety, and Trust.

Location of each KLMA (India) 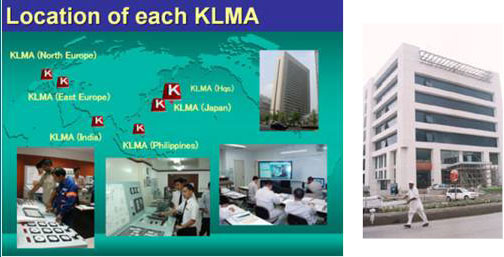