Kawasaki Kisen Kaisha, Ltd. ("K" Line) announced on January 29, 2010, that it had reached a basic agreement with US-based logistics service provider Air Tiger Express Companies Inc. (ATEC) for “K” Line’s capital participation in the company. “K” Line is now pleased to announce that it concluded a share transfer agreement with ATEC for the purchase of 51% of ATEC’s shares earlier today in Tokyo. Involved in the signing of the agreements were ATEC CEO Richard Chu and President & COO David Xiao, as well as "K" Line President & CEO Kenichi Kuroya, Vice President & Assistant to the CEO Toshio Shimizu, and Senior Managing Executive Officer Keisuke Yoshida. 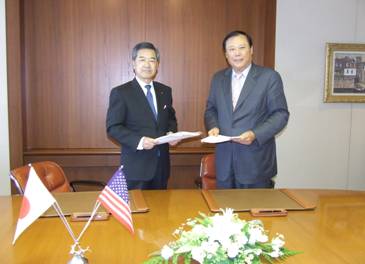 ATEC, headquartered in New York City, is a comprehensive logistics company that conducts business in the United States, China and elsewhere, with a focus on areas in Asia, providing a variety of services for businesses that include air and sea cargo forwarding, customs clearance, storage and cargo insurance. The founder and current CEO of the company, Richard Chu, who had established the predecessor of ATEC in Taiwan in 1976, moved the company to the United States in 1982. Subsequently, the company expanded its bases to include not only various parts of the U.S. but also locations in Southeast Asia and China; and in 2006 the companies handling the businesses in each area were reorganized to create today's holding company ATEC. Its major subsidiaries are Air Tiger Express (USA) Inc.; Air Tiger Express (Asia) Inc., which coordinates the Asia business companies; and Shenzhen Airport ATE Int’l Freight Co., Ltd., a joint-merger company formed with the Shenzhen Airport Authority. Even though ATEC is a medium-sized company, with only around 750 employees, it is a promising enterprise with a strong link to the fast-growing international logistics market in China.

“K” Line Group’s international freight forwarding business currently comprises two core companies: “K” Line Logistics Ltd. (KLL), which is primarily involved in air and sea forwarding, and US-based Century Distribution Systems, Inc. (CDS), which is primarily involved in buyers’ consolidation. For its part, ATEC has a solid operations base and extensive network in the Asia market, including China which is showing remarkable growth in the logistics business. “K” Line’s capital participation in ATEC is aimed at enhancing the “K” Line Group’s freight forwarding business and significantly expanding revenue opportunities, in collaboration with KLL and CDS, and with a particular focus on the air freight, customs brokerage and buyers’ consolidation businesses